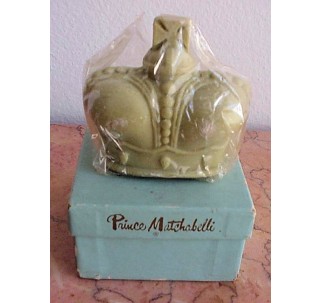 Here's a vintage soap fit for a queen! Dutchess of York Perfumed Crown Soap by Prince Matchabelli is one of the very rare novelty shaped soaps offered by a designer fragrance.  According to Wikipedia; "Georges Matchabelli was a Georgian prince and Georgian ambassador to Italy but fled the Soviet Union and emigrated to the United States after the Russian Revolution" He also happened to be an amateur chemist who opened his perfume business when he got to New York! Prince Matchabelli produced a male version of this crown soap marketed as "Stradivari Crown Soap". Both items were wrapped in cellophane, weighed 4 oz and came packaged in a 2 3/4" x 2 3/4" gift box.

Write Your Own Review